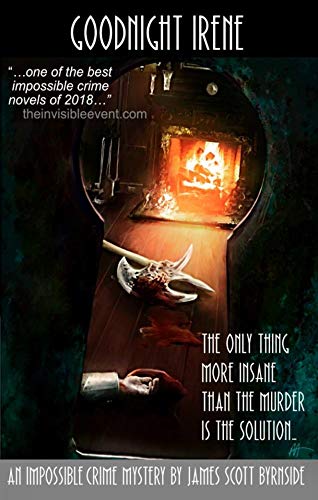 Paradine Hall has recently become besieged by spirits. Once a grand manor owned by a terribly wealthy noble family, it has fallen from that previous grace due to it’s owners financial troubles, causing them to turn the home into a country club. Recently, things have gone amuck as the place seemingly becomes haunted by a whole manner of things, all committing impossible acts. Spirits have invaded the rooms of two woman, flinging things about and attacking them in the process, objects have been thrown around by a poltergeist and a ghostly nun has been seen stalking the halls. A harp has also been played in a locked music room, with the strings still vibrating upon entry into the chamber. All of this culminates in dinner one night, where a chair begins to be moved by a invisible force, objects are thrown everywhere, candles are magically lit out, a dead cat ends up on someone plate and the ghost of the nun appears in the minstrel hall. This all leads to the help of Alexander Hero being acquired, given that his expertise in the area of paranormal investigation should lend a hand in dispelling the many ghosts of the hall.

Too Many Ghosts is somewhat of an enigma. It feels like a detective story at times, while also not feeling like a detective story at all.  Mind you there are large portions of the story where impossible events are occurring and being investigated, but the entire feeling of the story isn’t that of a novel where the sole focus is the crimes and the investigation, it’s the feeling of a story where impossible events are happening to a assorted group of people with outside investigation. That may not make sense, but what I’m trying to get at is that this isn’t a detective story even if it should feel like one, it’s more like a normal novel of some other genre thats only been infused with some mystery elements. This can either be a flaw, or not be a flaw, and for me, it is.

The story has a lot more focus on the people of the novel due to what I said previously about lack of detective story, but the fact that most of the characters are either cardboard or horrible doesn’t exactly help. There’s a lot of people here, so some of them failing shouldn’t be a surprise, but the amount of failing characters is more than some, it’s a majority. The men are defined by singular personality traits that don’t even stand out and the woman are simply looking for some form of love interest, married or not. Only five characters even stuck out to me, and are the only ones whose names I can recall at the moment. Most of the characters are stage props in essence, they are there too help tell the story and move it along, not to add depth in terms of characterization.

The character of Alexander Hero is, memorable, but for all the wrong reasons. As fellow blogger JJ put it, he’s a bit of a d***. His main contribution to the book seems to be pinning over nearly every woman in the house, with large passages in his point of view describing their physical attributes in description that is almost uncomfortable. I suppose this was supposed to help with the humor of the story (which is quite good minus Hero), but it instead drags down the book and makes it much worse. The woman also throw themselves at Hero like lemmings off a cliff, all desperate for some of his affection, and don’t get me started on some of the scenes between him and his stepsister. Detective’s usually don’t bother me when characterization is involved, but Hero was so scummy here that I couldn’t ignore it.

On the flip side, the plot of the book is stellar. The ghostly occurrences all have interesting explanations that fit in with the plot, and the solutions to all the crimes and their “connectedness” remind me of a Hoch short story. Some of the explanations are a bit disappointing, but Gallico manages to use magic tricks in a way that is both satisfying and compelling, creating some great pieces of impossible artistry. The solution to the impossible harp playing is perhaps one of the most original solutions I’ve come across in a while, with it provided the perfect jewel in the book’s plot crown. It’s also based on a magic trick, but the elements included in it make it lack the technicality that sometimes hinders those types of solutions. It’s all rather superb in retrospect, and the more I look back on it the more I adore it. The identity/motive of the culprit is also a kicker, with there being some genuine emotion in the conclusion and a great reasoning behind the crimes, with the ambiguous fate of a certain character making my heart pang a little. The plot makes up for a lot of the stories other flaws, with it being one of the most original I’ve read about in months.

The other point I want to look at is the surprising lack of atmosphere. Something that’s been mentioned in nearly every review, it sticks out like a very large and infected sore thumb. Some of the books scenes are done with excellent macabre (the dinner scene comes to mind), but many moments that could have easily been worked into horrifying and gripping scenes of horror aren’t. For a impossible crime about a haunted house, I expected much more in terms of shivers and shakes, and only got a minimal amount of them. The legend of the nun is also sorely undeveloped; it could have been elaborated on to great effect, but is instead shoved in for a few paragraphs and basically forgotten for the rest of the story. Gallico writes with great style, which provides some of the best descriptive passages I’ve read in a while, but maybe he was attempting to suit the humorous feel of the story by dialing back on any suffocating atmosphere, something that neither improves nor decimates my opinion of the book, it just leaves me feeling meh.

Too Many Ghosts is actually much better than this review makes it out to be. It has great moments of humor, a stellar plot, and some well developed characters – but the general low quality of most characters, protagonists failure to be a good protagonist, and lack of atmosphere harm it. Perhaps it isn’t one of the greatest impossible crime novels, but there’s a lot here to enjoy and as a result it gets a 3.75/5

Beneath the Stains of Time