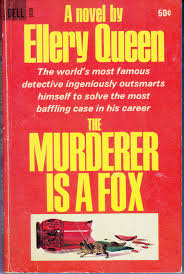 The Wrightsville era of Ellery Queen is commonly regarded as one of, if not the best of his era’s. More focus on character plus a simpler form of writing throughout the novels has lead to then being praised as much more welcoming reads than the often verbose tomes of early Queen. The Murderer is a Fox is commonly praised as the greatest Wrightsville novel, and by extension, the greatest Queen novel. Placed snuggly between Calamity Town and Ten Day’s Wonder,  it should live up to it’s reputation as a high point in a notoriously mixed output.

Davy Fox has just returned from serving in the military over the course of WWII, coming back to Wrightsville as a war hero. Returning to his young wife Linny, and what seems to be a prosperous future, soon screeches to a halt as he becomes plagued by nightmares, mental breakdowns, and sickening thoughts. This all culminates in a stormy night where in his sleep he nearly strangles his wife to death with his bare hands, causing immense fear to run throughout their household. This leads to Linny thinking that all of these issues are rooted in his fathers conviction for the murder of his mother, a crime for which he is still serving time. Bayard Fox supposedly poisoned his sickly wife through digitalis in her grape juice, with the motive being anger over her potentially having an affair. Attempting to settle these old ghosts, she goes to Ellery Queen for help, asking him to return to Wrightsville in order to reinvestigate the case, hopefully putting to rest whether or not Bayard Fox was innocent or guilty. Reopening the case, he must examine the boatload of evidence against Bayard, while stirring up conflict among the new Fox household.

The Murder is a Fox showcases how much development in terms of writing style the cousins had gone through over the years previous. It is witty, polished, and flows in a simplistic manner that makes reading it a joy. There is no extreme verbosity here, instead you find a few words being used to fully set up and color in a scene making everything somewhat fast paced, but ever the more enjoyable. It doesn’t need to have long and monotonous investigative sequences revolving around clue deciphering and witness interrogating, the interviews and clues are swiftly and concisely done in a manner that makes them interesting to read for once, instead of them being repetitive and just plain boring. The investigation is tied together with the characters that make up the story, fully integrating with their dynamics and their contributions to the plot as a whole.

Everything about The Murder is a Fox feels intimate. The story is confined to one family throughout all the proceedings. The result of the investigation will have a profound effect on everything that the Fox family had thought about the crime that occurred years previous, with it possibly shaking their morals and values to the core. Old sins cast long shadows here, and the family, both individual and united, must face them. Their secrets and opinions finally surface after years of being locked away, and they consistently realize throughout the narrative how much they turned a blind eye  and how much was hidden from them by each other. We see the members of the household in various combinations and settings, and they reflect upon the crime constantly, praying for certain outcomes and dreading others. It all feels raw and as said before, intimate. You genuinely sympathize and feel for the characters, watching as they struggle to come to terms with their own demons as the mystery continues to be unravelled.

The character’s are the best that I’ve encountered from Queen at this point in my reading of his stories. While assigned a basic mould at the beginning of the story (traumatized war hero, quiet old aunt, etc), they develop and break out of those moulds, while still maintaining those parts of their character. We watch Davy’s regret and hatred of himself as a person both grow and diminish, we watch Linny attempt to reconcile with her husband, we watch all of the characters as they struggle and are confronted, while also seeing them grow and learn in the process. Wrightsville has it’s place in this story, with familiars and new characters from it emerging within the narrative, and while they are good characters, they can’t compare to the main ensemble cast of the Foxes. Bayard is particularly fascinating, there is constant interplay with the idea of his guilt or innocence, and he is resigned to a limbo until the climax, a limbo that constantly keeps us guessing about his true motivations and his true involvement in his wife’s murder. The character’s all have a certain beauty to them, and that just makes the build up to the solution all the more crushing.

The most impactful scene is probably one that involves a very important witness to the crime. Upon her arrival, we learn of a horrible truth surrounding what occurred to her during WWII, and its a truth that ends of a chapter in a way that is incredibly poignant, saddening, and shocking. That moment was one of the most profound things in terms of raw emotion that I’ve ever read, and its something that I’ve reread several times since. A fantastic way of continuously incorporating the war into the story, while also delivering an emotional punch.

Given that is described as a detective story, I really should start talking about the mystery itself. The plot of The Murderer is a Fox is fascinating. We are given a crime from the past, and in the best of Golden Age traditions, we watch as Queen attempts to piece together a coherent picture from all of the scattered pieces that make up the crime. Witness testimonies are looked over, clues are examined, new statements of taken, all of these usually laborious elements are easily woven into the narrative in a way that doesn’t make them derivative, instead, its enjoyable to watch the police and Queen do their work. The murder itself is wonderfully done, with suspicion being neatly cast and false solution on false solution being thrown out. However, when the final resolution does take place, it seems anti climatic, until a certain tidbit is revealed by Queen, revealing a wholly unexpected and shocking solution. I had actually come to the conclusion that that solution was the correct one, but I brushed it off due to sheer unexpectedness, so I was just as shocked as anyone. Looking back on it, there really wasn’t that much substance to the mystery, but Queen managed to perfectly space everything throughout the story in order to make it feel much larger.

The Murderer is a Fox is a mix of the detective story and to a certain extent, the family drama. It is driven by its characters, with their interactions and memories being the focal point of the story, allowing us to see the true tragedy of the entire situation. We witness as the investigation occurs and watch as the puzzle is slowly solved, with it being perfectly integrated into the overall story. That integration produces a unique, and readable book which shows Queen at the height of his powers. The plot here is marvelous, but in the end, everything is driven by character and that is the greatest aspect of the book to me, showing how a old dog that is Queen can be caught new tricks, with the end result being a novel that is a true testament to the reason why Queen is so loved by mystery fans.

If I had to rate The Murderer is a Fox I’d have to give it a (likely) biased 5/5. It’s a near perfect story for me, and it makes me heavily anticipate what more there is too come from Queen.