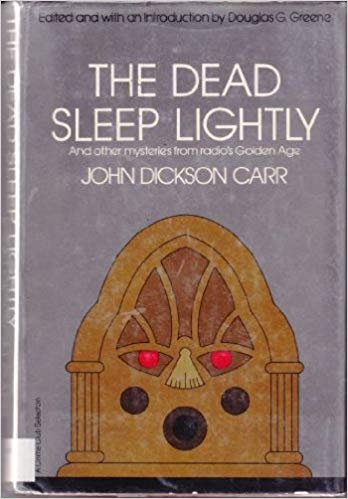 2019 is shaping up to be one of the greatest year’s for mystery publication and republication, with a new novel from Paul Halter, the first 10 Brian Flynn books, and various other Golden Age classics and books in the style of them being set for release. However, the most exciting set of rereleases (well, for me at the least) has to be the tidal wave of Carr coming our way. Last year ended off promisingly with the republication of TCOTCS, and as this year progressed, news about the coming release of classics like The Crooked Hinge, It Walks by Night, The Mad Hatter Mystery, Hag’s Nook and even the incredible She Died a Lady trickled out. Finding all of these reports got me in the mood to look at some of Carr’s oeuvre, which, in and of itself presented a challenge.

I gobbled up most of Carr before I even started this blog, so the pickings were quite slim. Taking this into account, and the fact that it was either plays or The Cavalier’s Cup, I decided that I might as well start listening to a few of Carr’s classic radio plays from Suspense, while writing a few short blog posts focusing on a few of them. To start everything off, I decided to go with The Devil’s Saint, described as “a minor classic” by Douglas Greene, all while featuring the classic room-that-kills troupe!

Ned, a nobleman of unspecific origin, has fallen deeply in love with Illona, a mysterious woman visiting Paris. Deciding that he would like to marry her, he asks her uncle, Count Kohary for permission to do so, only to be meet with a dismissal. However, Kohary still invites Ned to visit his ancestral chateau with Illona, an invitation that is quickly accepted. Arriving at the chateau, Ned is told the legend of the Tapestry Room, whose occupants are found dead after spending the night there, with not a trace of what caused the death to be found. Challenged by Kohary to spend the night there in order to gain Illona’s hand, Ned accepts, and proceeds to lock himself inside the cursed room…

First and foremost, this isn’t a mystery play where a crime occurs and is solved. This is more so a thriller, with the trappings of a classic locked room mystery thrown in for good measure. I think that the thriller format is much more suitable for this type of radio play, as it allows for all of the nuances that come from radio (sound effects and the like) to be used very ingeniously in order to build up tension at certain moments or to create a constant uphill slope of terror. The Devil’s Saint definitely encompasses the latter, with there always being an uneasy feeling behind everything. The atmosphere is breathtaking, incredibly thick and impossible to break through, and a real sense of horror covers the play as it progresses.

Sound effect’s are utilized brilliantly in order to set mood and/or formulate a basic aura around a character or setting. Hysterical laughing, bone chilling violins, a somber narrating voice, it all fits together in order to create the story, almost like a plot made out  of sound. Carr’s writing is as good as ever here, and the 30 or so minutes that the play runs for flies by, thoroughly entertaining  down to the the very last second.

Carr is known for his subversion of expectations when it comes to his detective stories, and this is no exception. While setting up the characters in the beginning, he also sets us up to fail when it comes to deducing the culprit. We start to see certain people in certain lights, and Carr uses this to sweep the rug from under us during the climax. We get a very well thought out and tense confrontation scene in the Tapestry Room, with the specifics of the puzzle coming out, and a grand climactic reveal that shocked me to the core. I can see why this has been called a classic, and it almost seems like a precursor to what would later come in the form of one of Carr’s greatest short stories.

I adored the character of Count Kohary, someone who really comes to life and becomes a force of his own, driving the story forward while always having an entertaining persona around him. Ned is the stereotypical Carr protagonist, and Illona the stereotypical Carr heroine, though both have some fun development in the last few scenes. Not cardboard, but certainly not anyone from He Who Whispers!

If I had to note something disappointing, it’d have to be the usage of the cursed room. While it maintains a presence, it’s never brought to life. There’s never a fear of it, no real build up to it. The runtime likely is to blame for this, as you can’t really forge the room into a fully realized creation when its only featured for around 10 minutes, but I still wish that we had a little bit more to work with.

The solution to the locked room murders is also decent. Not too simplistic or spectacular, but hardy and suitable. There’s a nice bit of foreshadowing to it early on, and it fits everything snuggly, not bad, not bad at all. Motivation is a bit iffy. It’s not very realistic, but it’s clued in a way and it fits the theatrics of the narrative, so while  it doesn’t evolve into a downside, it becomes more of a curiosity if anything.

All in all, Carr proves to be as much of a master at the radio play as he was at the crime fiction novel. It’s amazing to see his work once more enter into relative availability and to watch new people encounter and witness just how good he actually was! This was a great listen for a rainy day, and I’ll certainly be looking into more as the weeks go by.