Paul Halter is an author who I can firmly say is an obsession for me. Anyone who can produce impossible crimes in the modern era will naturally be, but at his rate and his quality, I can call myself quite the fanboy. However, The Picture from the Past is a title even I forget exists, even with it being in a prominent place on my bookshelf. And you know, that brings a question to mind – why exactly? Is it a bad book? It sounds good enough, and I’ve never read a truly negative review, in fact I’ve seen laudatory ones. Eventually I had to decide between this one or The Invisible Circle, and given my preference for Alan Twist, I dived in. 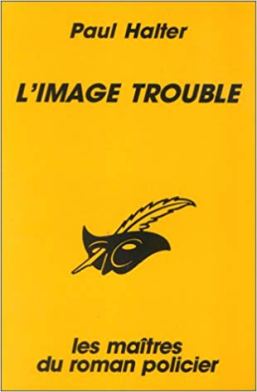 The Picture from the Past is a tale built on two separate stories. One set in the modern day, with the other taking place in the distant past (the latter narrative is written completely in italics). The modern narrative takes place in 1959, and is itself comprised of two different strands. The first involves the tracking down of a serial killer – known as The Acid Bath Murderer, who disposes of his victims in a rather obvious way! The second involves the troubles of a newly married couple, Andrea and John Braid. John is overcome by a strange emotion when he sees a rather normal photograph on the cover of a book, and his wife becomes intent on discovering the truth behind it, with mysteries regarding his career and the photo soon piling up before a impossible disappearance occurs.

The narrative in the past focuses on the Jacobs family, who are the victims of terrible tragedy when the family matriarch is brutally murdered. Strangely enough, this murder was predicted by a local clairvoyant whose business soon flourishes. One of the families sons soon disappears, and a general aura of sadness covers their world, until more strange events begin happening two years later. Chief among them is the locked room murder of the previously mentioned clairvoyant, and we soon watch as both present narratives begin to spiral towards each other.

I think the key interest point of TPFTP is the connection between the separate threads. We watch them continually play out, with more and more similarities popping up as we progress. It’s a very good piece of work, the changes between narratives don’t feel forced, and the way they don’t juxtapose each other in a way that ruins the flow of the story, it may even enhance it! It’s really fascinating you know, to watch as we get closer to the finale and see everything pick up, wondering how it’ll all be connected and what juicy little secret Halter has in store for us.

Another big point is the perspectives in each narrative. We switch between them without any real warning, and while they can click together quite easily, some are just very stark, and if you haven’t been paying attention you’ll need to dial pick and quickly reread before you can continue on. Of course some would like a warning or two, but given the already complex and phantasmagorical premise of the story, it’s not exactly detrimental.

Now, when we exactly do get the reveal that we’ve all (presumably) been longing for, well it’s …  a lot!

The story enters into it’s final stretch with some wonderful scenes, lots of built up excitement as we start to tie up some lose ends and as new sparks are thrown into the separate plots. And then we start getting to the solutions. The first narrative has a superb one, and given that it was the one that always had the most interest for me, I was quite satisfied. It features one of Halter’s better hidden killers, good clueing and motivation, with the only sour spot being the impossibility, which was mediocre if fitting at best.

We then enter into the second narrative, and that’s where things get really interesting. The impossibilities there are much better than the ones in the present, and the overall solution is bland if fitting. The locked room murder has a very creative solution, one that seems to be a bit overrated in some reviews (given my tastes), but one that is still a nice conceptualization. It’s here where we get the connection between the two narratives, and it’s rather hard to describe my feelings about it.

Originally, I would call myself disappointed. Compared to the complete metaness of say, The Madman’s Room, I was expecting something just as brilliant, especially with how the story had been building up to it. It’s essentially a twist that’s just, well, there. There’s no one line reveals all sort of deal at the end of the chapter, instead we start off a chapter with it, and what follows attempts to explain it all.

I was underwhelmed (severely), but as I thought about the story in the days that followed, it really started to click for me. One detail in particular, relating to a certain person’s occupation, just fits together like a glove, especially when everything is viewed in the light of a bigger picture. And then all those little details, little peculiarities, start to make more and more sense, and it’s actually brilliant after all. There’s a fine line you have to walk when making a meta ending. You can’t exactly state something directly, but you can’t obscure it to an inane level either, and I think TPFTP occupies a weird limbo between those two boundaries.

We then get the epilogue. I was expecting another surprise twist to be layered onto what had happened before, but instead I simply got a few pages that confused me more than enlightened me. Maybe I read it in the wrong way, or I’m just a thick skulled buffoon, but it was hard to make sense of it, even if it kept on bothering me for days after the fact. If anyone would like to shed some light on it, please do!!!

TPFTP is a strange work in Halter’s chronology. It’s not a classic by any means, but it’s not inept trash either. There’s glimmering brilliance in the way he crafts the separate narratives and connects them, and it’s a very fine tuned piece of work, tightly created and tightly held together. It’s well above mediocre, but I think it falls down in categories like atmosphere that have so thoroughly categorized my love for his work in the past, that I can’t exactly praise it to the heavens and back. Regardless, a solid 4 / 5, if you have some spare money, do give it a try!