Sometimes, I put myself into the position of a eccentric millionaire trapped in the

confines of a Golden Age styled detective novel. Now my eccentricity? I’d probably be throwing hordes of money down the throats of some willy translator in order for them to produce translations of foreign language locked room mysteries, though I’m sure my greedy relatives would eventually get fed up and would find a way to finish me off. Never the less, I’m always delighted to see a book come into English print from a foreign language, especially when it’s something as renowned as this tome. Every since we first got a taste of Soji Shimada in The Tokyo Zodiac Murders, I’m sure almost every fan of impossible crime literature had been on the edge of their seats, waiting for a translation of another work.

And then, 15 or so years passed without a word, and it almost seemed like we were never going to see another work from the originator of the honkaku movement. But luck (or maybe a miracle by the hands of God) eventually did sign on us, and Murder in the Crooked House was announced and released. Now, before I get into the review, I’d just like to thank Pushkin Vertigo and Louise Heal Kawai for helping bring MitCH to the general public, and for the amount of work they must have put into getting it into my grubby little hands.

Murder in the Crooked House centers around a very unique and Western inspired home, straddling a cliff by the Okhotsk Sea in frigid Nothern Hokkaido. The Ice Floe Mansion, as it is called, was built by Kozaburo Hamamoto, and has two distinct features. Firstly, it has its own replica of the Leaning Tower of Pisa, though this one in coated in aluminum and has nothing in the actual tower, and the entire mansion itself is built at a slant, disorienting visitors (The Haunting of Hill House anyone??). Hamatoto built the home for no real specific reason, just as a way of using his money and entertaining himself as he watches any guests fumble in the maze-like annals of the house, and nothing seems out of the ordinary when he invites a group of eight or so to visit over Christmas.

There’s no way anything could go wrong, I’m sure we can all 100% agree on!

Alas, life isn’t as peachy keen, and one night, someone is woken up by a strange noise, only to then see a mans face staring right into her room through the window. This leads to a sleeping fit that wakes up everyone in the home and in the fits of hell, and by morning, an actual murder victim is found in a locked storage closet. Now, this would all seems stereotypically mundane, if it wasn’t for the presence of a life sized doll called Golem that is found strewn about the grounds in pieces, lending to rumors of possession by evil spirits. Inevitably, other victims fall dead in more impossible scenarios, and the police are about as stumped as you and me likely were before they get the help of amateur detective Kiyoshi Mitarai. 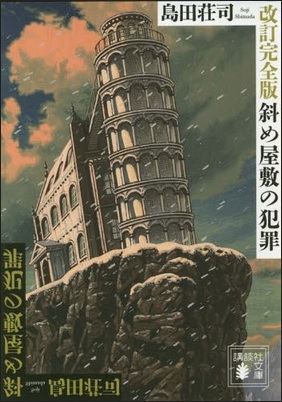 This is a puzzle heavy and puzzle centric book. That is the first thing that came to mind when I set around to reviewing it. This isn’t a story for someone who wants depth in characterization, and well, meat in any category besides detection. I think that might be the biggest flaw with MitCH, while the puzzle is superb and complex and everything you could want from waiting for 15+ years, it feels almost overwhelming in how complex it gets. There isn’t much legitimate depth in the puzzle, apart from things happening simply because they have to be tailor made to fit it, and all atmosphere (and wonderful atmosphere at that) basically destroyed as soon as the police arrive and the snooping starts.

Before the police’s arrival, we get this wonderful description of the guests and their workings about the house, theres a rich atmosphere of tension as to what exactly is going to happen, and it’s hard to put down. We get this genuinely hilarious dinner scene, and everything comes to a climax when Kumi spots a mans face in her window, which is one of the most brilliant pieces of writing I’ve read this year. But after the discovery of the first murder, and the beginnings of the investigation, all of that creepiness and dread just vanishes right before your eyes, and all that you get from that point on is descriptions of the howling wind and a small scene near the denouement that never is given much thought afterwards.

While I flew through the book, I was left a bit, underfed, by the end of it all. I wanted more. Not more mystery, but just a little something else to garnish the plot, though what exactly I wanted remains an enigma. That’s not to say it’s bad, its very good, and I can’t stress that enough.

The puzzle is ingenious, as I’ve said before. Its so much complexity and so many elements tied together perfectly. The first two impossibilities are amazing, especially the second one, which probably has one of my favorite solutions to a impossible crime simply because of how well adapted it was to the exact conditions of the house. I love it when solutions are created organically out of the circumstances of their crimes, instead of seemingly being tossed in at random, and the same applies to the first situation as well. While yes, there are coincidences that play into these solutions, they feel natural, and don’t make me smack my head in disappointment. I just kept reading on without a second thought! There’s a third crime too, but its not very interesting in terms of solution and while it makes sense for the storyline, its weak and barely clued at all.

Culprit and motivation are interesting cases. I think the culprit is obvious from the first section and throughout the entire story. I juggled between two characters for a while but locked down my pick, and I wasn’t at all surprised when the big reveal happened. For me, the motive was an attempt at Shimada trying to add some emotional content into a story almost completely devoid of it, and it really didn’t work out for me. For one thing, it’s quite ridiculous, and for another, the amount of effort and planning put into it is literally one of the most devoted things I’ve ever seen in detective fiction or in the real world, and I’d be surprised if anyone didn’t see it as unreal and almost as impossible as the crimes themselves.

I think Shimada created this amazing impossibility, and created the setting of the Ice Floe Mansion just to utilize it and create a solution. This is a book where everything very much centers around that main course. With that crime created, he just added layers and layers and layers onto it in order to create a puzzle as perplexing as possible, and then simply placed in a few characters to act as cogs in the machine and turned it on.

This is one of the first books I’ve read where theres not much I can discuss other than the puzzle. It’s hard to find anything else to discuss in actuality. It shows a lot of promise and makes me hungry for even more Shimada, for even more outrageous situations and skyscraper sized solutions. If anything can be seen from this story, and TKZM, its that Shimada is on his way to creating a catalogue of stories that will surely amaze anyone who inevitably dips into it, and while this wasn’t the greatest mystery novel I’ll ever read, I’ll still be patiently in line if we ever get a third translation.